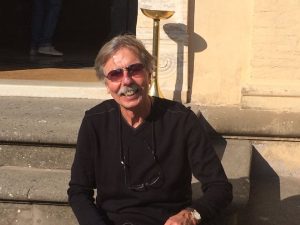 It seems like 50 years would be an adequate amount of time to examine a life, but actually, it is not. At one point, well before now, I realized that the School of Social Work was going to have an outsized influence on my life, and my career.  At some points my work became the same as my life, and it was a good match and the School was the balancing point that made it work, the relationship continued.

I came to Wisconsin from Indiana, after 4 years in the Marine Corp, 4 years at Indiana University undergraduate study and work, every summer at the Gary, Indiana Steel Mills.

It made for a strange combination of experiences, made more so by employment obtained with the Wisconsin Division of Probation and Parole, which at that time was hiring Social Workers as direct service agents and encouraging advanced education.

It seemed like a unique circumstance, but I had already decided on Social Work and this would be how I could achieve it. In addition, the School had a robust Field Program which emphasized direct service to clients and on the job service as well as classroom learning. And as a statewide agency, Probation and Parole provided consistent service throughout Wisconsin to the entire population of the State.

As a MSW graduate, my caseload included Men, Women and youth. In my first position I worked Up North in Rusk County with High Schools and young, high school age youth, who were placed with Corrections by the juvenile Courts. After 5 years at that position I  moved to supervising Agents across 7 counties out of Baraboo and in the North and West from Madison. Finally,I  returned to Madison as a supervisor of Agents, overseeing contracts and funding for the Madison Region and maintaining my Social Work title by running groups for violent Offenders. And, as part of returning back to Madison, I also taught a classes on Social Work in the Criminal and Juvenile Justice System and a class on Criminal Justice for Sociology.

The positions were varied and challenging and as I got close to retirement it again provided me with contacts with the University and the challenge of working with College students.

In summary, the School of Social Work, and the faculty and staff opened the door and I walked through it, a relationship that lasted over 50 years. I realized it is a “good match”.