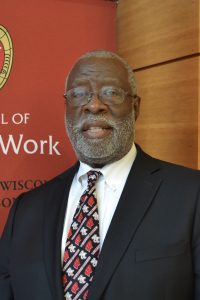 2017-Present
Daniel Burrell, PhD ’92 retired in 2013 after a 44 year career in Higher Education and Public Service.  At the time of his retirement he was Associate Vice President of the Milwaukee Area Technical College, a large diverse college with four campuses. His responsibilities included the College’s admission, counseling services, academic advising, and student accommodations services. During his MATC career he also served in several other leadership positions most notable as Dean of the Division of Liberal Arts and Sciences. Earlier in his career, he was the Founding Director of the UW Milwaukee’s Center for Afro-American Studies. Dan, as a strong supporter of UW-Madison, is a member of the Bascom Hill Society and has served on the Wisconsin Alumni Associations Board of Director where he chaired the Diversity and Inclusivity Council. In addition to helping the School of Social Work by serving on our Board of Visitors, Dan continues to support campus wide diversity programs and initiatives. He is currently serving as a member of the Letters and Science Dean’s Alumni of Color Advisory Group. He is a firm believer in the role of education as a primary vehicle for social and occupational mobility. Dan and Jenice have sons Daniel III, a systems engineer and Marc, an interventional radiologist. Dan graduated from Shaw University (Raleigh NC) with a BA in sociology 1967, UW-Milwaukee MSSW 1969 and UW-Madison PhD in Social Welfare 1992.