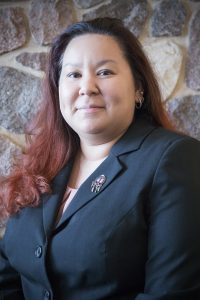 2019-Present
Stephanie Lozano, MSW, CSW, is the Tribal Liaison for the Wisconsin Department of Children and Families. Since joining the department in 2016, Stephanie has worked to strengthen the intergovernmental relationships between the department and the 11 sovereign tribes that are headquartered in Wisconsin through direct consultation, technical assistance, and coordinated support services. In her role, Stephanie provides the department leadership with policy analysis, tribal perspective, recommendations, and strategic advisement on tribal affairs.Prior to joining DCF, Stephanie spent 10 years working for the Ho-Chunk Nation where she progressed from an ongoing social worker to the Indian Child Welfare Program Supervisor and a Presidential appointee (Legislature confirmed) as Executive Director of Social Services. During her tenure as a social worker and supervisor she was overseeing cases involving the Indian Child Welfare Act involving Ho-Chunk Nation citizens within the State of Wisconsin and throughout the United States. Stephanie was an integral member of the negotiation team that codified the Wisconsin Indian Child Welfare Act in 2009 and continues to serve as a trainer and subject matter expert in the field of Indian Child Welfare.Stephanie received her Bachelors of Science in Sociology from the University of Wisconsin-La Crosse and her Masters of Social Work from the University of Wisconsin. She is also a certified social worker.