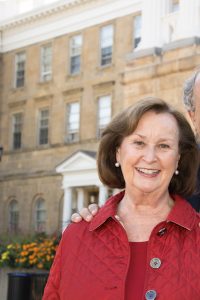 2017-Present
Judith Emmons (Clancy) Topitzes grew up in Marinette, Wisconsin.  She received her BA in Psychology from UW-Madison in 1963 and her MSSW from UW-Madison in 1965.  Judy worked at the Mendota State Hospital (now Mendota Mental Health Institute) in the 1960s and in 1969 began a more than 30-year career as a School Social Worker with the Madison Metropolitan School District, where she held multiple roles and represented the district on several Dane County committees.After retiring in 2001, Judy became President of the Board of Prevent Child Abuse Wisconsin, served on the board of Madison Symphony Orchestra Inc. and has been a member of the Attic Angel Association. In recognition of her ongoing service to the community, she received the United Way Community Volunteer award (2004) and Madison Downtown Rotary Senior Achievement award (2014).Always a strong supporter of the School, in 2016, she and her husband Nick Topitzes initiated a scholarship for Wisconsin students of recent immigrant heritage who are attending the UW-Madison Sandra Rosenbaum School of Social Work.  Judy supervised numerous UW Madison SSW grad students in their field placement during her years at Mendota State Hospital and the Madison School District.