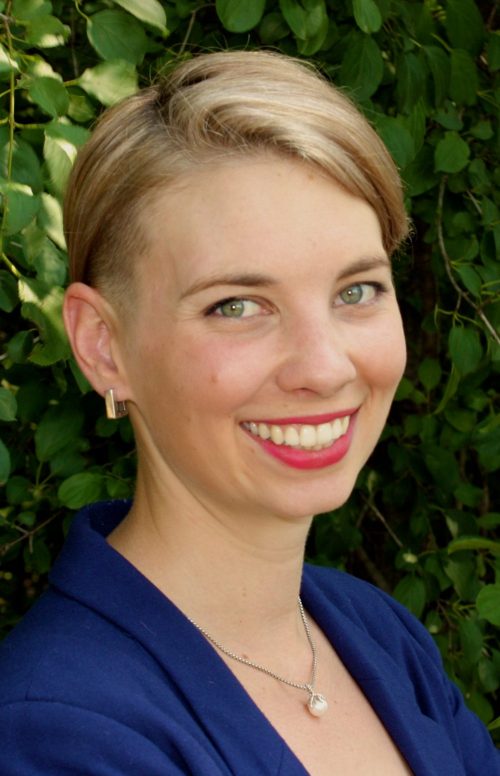 Emma Carpenter’s work is defined by her passion for family planning, reproductive health, policy – especially health policy – and justice. The fourth-year PhD student is in the midst of a unique study into the pregnancy intentions and decisions of a too-often unrecognized population: queer women and non-binary individuals assigned female at birth[1]. Implementing a modified grounded theory approach, Carpenter is interviewing 20 individuals to learn how they plan for pregnancy or deal with mistimed or unwanted pregnancies. Her research fills important gaps in family planning and reproductive health, and she hopes will ultimately improve the services and messages queer patients receive.

As a queer woman, Carpenter has committed herself to research not on the queer community, but rather with members of the queer community. “My research centers queer voices, challenges traditional ways of measuring queer identity, and attempts to better represent the experiences of queer-identified women,” she stated in her funding proposal.

“Eventually, one of my goals for research in general is to make a direct link between research and change,” Carpenter says.

Carpenter describes herself as a “political junky and policy wonk since birth.” She jokes that by the time she was five years old she could name of all her representatives and supreme court justices. Working for a health care research consulting firm after college highlighted a need for better connectivity between those who make policy and the impact those policies have on people.

“When I decided to do an MSW I was really interested in the macro level – how does policy impact what’s happening for people?” An interest in policy and people eventually lead to the PhD program and a research project on how lesbian, bisexual, and queer-identified women use contraception.

“I was so excited about that project because I’ve been working in some form on reproductive health and reproductive justice-related projects for almost 10 years now and had never ever felt like that work was relevant or representative of my community. I thought it was so important, for women generally, but that queer women weren’t really represented or thought about in that work, so I was really motivated to take on that piece of it and that perspective.”

Carpenter and colleagues previously found that there is an implicit and sometimes explicit message that contraception is just for straight women, though pregnancy is often a concern for Sexual Minority Women (SMW).

“Compared to hetero women, queer women have a higher rate of unwanted pregnancy, so there is clearly something amiss,” but it’s not clear that providers are equipped to meet patients where they are or to understand the differences in how personal and social identity play a part in decision-making and services.

As Carpenter points out, social workers are fond of talking about ‘person-centered’ services, but, “for a queer folks, you can’t offer them person-centered care without paying attention to their identities.”

After interviewing the first 11 study participants, Carpenter has found that participants generally appreciate having space to talk about their experiences. For Carpenter, it shows that these topics are important to those participating and that not enough of these conversations take place.

Holding space with women sharing personal experience caries a responsibility that Carpenter takes seriously. “Representing peoples’ experience and stories is powerful and important by itself, but then also knowing what to do what those stories is important,” she says.

Without specific knowledge and understanding of what queer people experience, the services and messages they receive can be inadequate if not harmful. For example, Carpenter points out that accessing abortion in United States, especially in certain states, is extremely difficult for women generally and, “to add a layer of invisibility and sometimes outright disrespect for your identity just makes a difficult experience more difficult.”

In her study, Carpenter talks to people who have been pregnant, especially people who didn’t want to be, and to people who are thinking about getting pregnant. “I think it is important to look at the range of pregnancy  desires and experiences, from folks achieving very wanted pregnancies to needing to access abortion, and all of the complex feelings about pregnancy between those two ends, to understand how sexual identity influences pregnancy desires and experiences,” she says.

Studies into how and when people intend to get pregnant have not really looked at how that may or may not be different for queer individuals. She was interested in that gap and how people make choices to build families.

Through the research, she is also looking at the larger picture of a person’s environment to understand the multi-faceted aspects that go into their decision making. “How does the entire context of someone’s life impact what they are doing and what barriers they are facing to achieving their goals – whether that be to have a really wanted pregnancy or to avoid having a pregnancy?” she asks.

Since LGBT+ voices are not well represented in the research, Carpenter’s modified grounded theory approach, “allows for the explanation to come from the words of the research participants,” she says. “It lends itself, if done the right way, to giving voice to previously unheard from people.”

Eventually, she would like the work to contribute to concrete policy and practice. “Generally, people still have a pretty heteronormative view of all these phenomena– pregnancy, family building, unwanted pregnancy, and reproductive health generally – and I think that filters in conscious and unconscious ways into policy and into practice.”

There may not be a direct policy recommendation from the work just yet, but, “changing who policy makers think about when they think about somebody trying to prevent pregnancy or think about a couple building a family, if they are thinking about not just the heteronormative couple, that is a contribution,” Carpenter says.

Carpenter hopes to complete her first round of interviews this spring, with follow up interviews and data analysis following. In addition to her research, Carpenter currently sits on the Board of Directors for the Society for Social Work Research and Planned Parenthood Advocates of Wisconsin. She hopes to graduate in 2020.

Carpenter’s dissertation project is supported by the Society for Family Planning.

[1] A note about language: According to Carpenter, the widely used and accepted term in academic circles is “Sexual Minority Women,” which for purposes of her study refers to women who were assigned female sex at birth and identify as a sexual minority (e.g. lesbian, bisexual, pansexual, fluid, queer). Carpenter also uses the term “queer” to represent the individuals she’s talking to and about, though that’s not a term everyone identifies with. When talking to individuals, she says, “I ask people how they identify and ask them what that means to them and how that might have changed over the course of their life. In individual interviews, we can get to the nuances of identity and we can talk on an individual basis,” but it can get more difficult when presenting the work broadly.